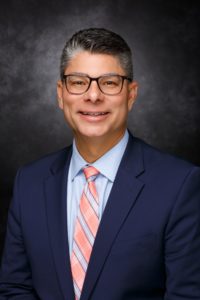 Glen Becerra works for the Los Angeles County Metropolitan Transportation Authority (Metro), where he joined their communications team as the Executive Officer for Marketing. Prior to joining Metro, Glen worked for the Southern California Edison Company, where he served as Chief of Staff for the Public Affairs Department and Senior Project Manager for the Regulatory Policy & Affairs Department. Glen also worked for Assemblyman James L. Brulte as a Legislative Aide, managing legislation dealing with California's Utility Industry and the State Allocation Board, which is responsible for financing the renovation and construction of public schools. Glen was successfully elected to the Simi Valley City Council in 1998 and became the youngest member to ever serve on the council. He would go on to be reelected four consecutive times, becoming the longest serving councilmember in city history. He served a one-year term as Mayor Pro Tem in 2002, 2006, 2010, 2014 and in 2018, before retiring from the City Council at the end of 2018. The first in his family to graduate from college, Glen attended Moorpark Community College and the University of California, Berkeley, where he earned a B.A. in History in 1993. After graduation, he was accepted into the Executive Fellowship Program, a public policy program sponsored by the Governor's Office and the Center for California Studies at California State University, Sacramento. Upon completion of the Fellowship program, Glen joined the Wilson Administration as Deputy Director for the Office of External Affairs, which oversaw the Governor's local field offices and was the liaison for law enforcement, crime victims and other constituent groups. Glen’s community involvement includes serving on the California Student Aid Commission as a Gubernatorial-Appointee for both the Wilson and Brown Administrations. He served on the Board of Directors for the Boys & Girls Club of Simi Valley, holding the position of Vice President for Fund Development. He is a member of the Simi Valley Education Foundation Advisory Board, served on the Simi Valley Chamber of Commerce Board of Directors from 1996 to 1998, and was elected to the Board of Regents for California Lutheran University from 2009 to 2018. Glen has served as President for the League of California Cities Channel Counties Division (Ventura, Santa Barbara and San Luis Obispo) and on the Board of Directors for the League of California Cities statewide organization. He represented the cities of Simi Valley, Moorpark and Thousand Oaks on the Southern California Association of Governments (SCAG) Board of Directors for 18 years and served as President for that organization for 2012-13. In 2001, President George W. Bush appointed Glen to the White House Commission on Presidential Scholars, a body that selects, recognizes and honors top achieving high school seniors from across the country, a position he held until April 2010. As a Councilmember, Glen served on the City's Affordable Housing Subcommittee, Armed Forces Banner Advisory Committee, Sustainable Simi Valley Committee, was a Trustee for the Simi Valley Library Board of Trustees and served as a City Council liaison to the Neighborhood and Youth Councils. Glen also served on the Ventura County Animal Services Commission. The Becerra family emigrated to Simi Valley in 1923. Glen and his wife Sally have two children, Elizabeth and Nicholas, who are now 4th generation residents of the community

Help
You may choose to prevent this website from aggregating and analyzing the actions you take here. Doing so will protect your privacy, but will also prevent us from learning from your actions and creating a better experience for you and other users.
Cookie settingsDECLINEACCEPT
Manage consent

This website uses cookies to improve your experience while you navigate through the website. Out of these, the cookies that are categorized as necessary are stored on your browser as they are essential for the working of basic functionalities of the website. We also use third-party cookies that help us analyze and understand how you use this website. These cookies will be stored in your browser only with your consent. You also have the option to opt-out of these cookies. But opting out of some of these cookies may affect your browsing experience.
Necessary Always Enabled
Necessary cookies are absolutely essential for the website to function properly. These cookies ensure basic functionalities and security features of the website, anonymously.
Functional
Functional cookies help to perform certain functionalities like sharing the content of the website on social media platforms, collect feedbacks, and other third-party features.
Performance
Performance cookies are used to understand and analyze the key performance indexes of the website which helps in delivering a better user experience for the visitors.
Analytics
Analytical cookies are used to understand how visitors interact with the website. These cookies help provide information on metrics the number of visitors, bounce rate, traffic source, etc.
Advertisement
Advertisement cookies are used to provide visitors with relevant ads and marketing campaigns. These cookies track visitors across websites and collect information to provide customized ads.
Others
Other uncategorized cookies are those that are being analyzed and have not been classified into a category as yet.
SAVE & ACCEPT
Powered by