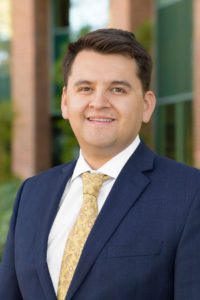 While Mr. Robles began in local television news at KNBC, most of his career has been devoted to legal public relations and marketing, having worked with some of the largest and most recognized law firms in the country. He created national, consumer-focused campaigns successfully spear headed marketing proposals to retain large clients, worked one-on-one with lawyers to positions them as experts in the field, and helped firms throughout the country brand (and rebrand) themselves.

In 2015, Mr. Robles brought his skill-set and background to the government sector – local government and transportation. He currently serves as Chief of Public Affairs for SunLine Transit Agency. His department is charged with managing all facets of communications, messaging, and marketing of SunLine. Recently, spearheading SunLine Refueled – the largest transit redesign in the Agency’s history.

He holds a Bachelor of Arts in journalism and a Master of Arts in communication. He is an active member in CAPIO, APTA and Latinos in Transit.

Help
You may choose to prevent this website from aggregating and analyzing the actions you take here. Doing so will protect your privacy, but will also prevent us from learning from your actions and creating a better experience for you and other users.
Cookie settingsDECLINEACCEPT
Manage consent

This website uses cookies to improve your experience while you navigate through the website. Out of these, the cookies that are categorized as necessary are stored on your browser as they are essential for the working of basic functionalities of the website. We also use third-party cookies that help us analyze and understand how you use this website. These cookies will be stored in your browser only with your consent. You also have the option to opt-out of these cookies. But opting out of some of these cookies may affect your browsing experience.
Necessary Always Enabled
Necessary cookies are absolutely essential for the website to function properly. These cookies ensure basic functionalities and security features of the website, anonymously.
Functional
Functional cookies help to perform certain functionalities like sharing the content of the website on social media platforms, collect feedbacks, and other third-party features.
Performance
Performance cookies are used to understand and analyze the key performance indexes of the website which helps in delivering a better user experience for the visitors.
Analytics
Analytical cookies are used to understand how visitors interact with the website. These cookies help provide information on metrics the number of visitors, bounce rate, traffic source, etc.
Advertisement
Advertisement cookies are used to provide visitors with relevant ads and marketing campaigns. These cookies track visitors across websites and collect information to provide customized ads.
Others
Other uncategorized cookies are those that are being analyzed and have not been classified into a category as yet.
SAVE & ACCEPT
Powered by